Patrick Walsh
Patrick Walsh is a theatre director and producer who believes in the power of language, art, and community to change lives. His work has been seen across the United States of America. He currently serves as the Executive Artistic Director of Northwest Classical Theatre Collaborative Inc, touring classic theatrical stories to culturally under-served audiences; bringing art to people who have the least access to it and knitting rooms together throughout the state of Oregon. 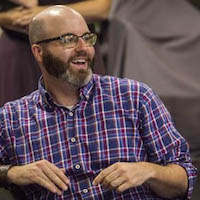