Kilslaay Kaajii Sding Miles Richardson
Kilslaay Kaajii Sding Miles Richardson, O.C., is a citizen of the Haida Nation and Canada. In 1984, he was the youngest person to be elected president of the Council of the Haida Nation, a position he held until 1996. During his tenure at CHN, Miles led the drafting of the Constitution of the Haida Nation; development of the first comprehensive Haida Nation land and marine use plan, enacted under Haida law; and negotiation of the Gwaii Haanas Agreement, the first nation-to-nation agreement between the Haida Nation and Canada, which protected the Gwaii Haanas area of his people’s homeland, Haida Gwaii.
In 1995, he was appointed a Commissioner to the BC Treaty Commission; in 1998, Miles was chosen as its Chief Commissioner and served in that role until 2004. In 2007, he was named an Officer of the Order of Canada.
Rewriting the Rules 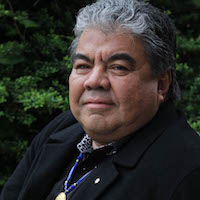