Trevor Ainsworth
Trevor Ainsworth is a passionate drummer and percussionist of many genres of music with over
twenty years of playing experience. His style reflects his love of rock/jazz fusion with elements
of latin inspiration as well as hip hop and R&B soul. He enjoys playing live as well as in the
recording studio, and is featured on such projects as SOLA, Camrus Johnson, and the Kendall
Goddard Band. He has played live on national television with Sister Says and is proud to be the
band director for Ronnie Dean Harris, who performs under the name of Ostwelve. Trevor has
been featured recently with the powerhouse rock band Bitterly Divine and Curtis Clearsky & the
Constellationz. Notable past performances include Indigenous Day Live with Sister Says on the
APTN network, as well as playing with SOLA as part of the Vancouver International Jazz
Festival, and playing the Malkin Bowl with Bitterly Divine. When he’s not drumming, Trevor’s
other passions include working with rescue dogs to rehabilitate them into family balance, writing
science fiction / horror stories, and voice acting. Trevor currently lives in Coquitlam, British
Columbia with his life partner Adriana, their daughter Skyris, and their dog and cat, Polar and
Javier.
Candace Curr & Withe: Music and Art Performance 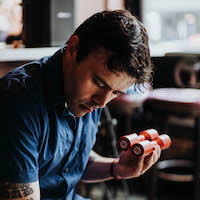