Prior to establishing Cause+Effect, Ian spent almost eighteen years as CEO of Ecotrust in three countries – Canada, the US and Australia. Before establishing Ecotrust Canada in 1994, Ian was a documentary television reporter with CBC Television. Ian earlier spent seven years as a senior reporter and editor with the Vancouver Sun. He is a fellow of Journalistes en Europe (1986-87); a past director of Vancity Community Credit Union; and the author of four books, most recently No News Is Bad News: Canada’s Media Collapse – And What Comes Next. He is a contributing editor of The Tyee and continues to be published in a wide variety of media. He was president of The Discourse (2016-18); an Adjunct Professor at the Centre for Sustainable Community Development at Simon Fraser University (2015-2019); and a Senior Fellow with the Montreal-based McConnell Foundation (2015). In 2019 he was appointed as the inaugural Dan and Priscilla Wieden Foundation Salmon Nation Storytelling Fellow. In 2020, he co-founded an independent bookstore in Vancouver, Upstart & Crow. He lives in Vancouver and on a small island off the West Coast of Salmon Nation.
Salmon Nation Information Session
The Environmentalist's Dilemma
Salmon Nation Information Session
Salmon Stories: Taking the Pulse of Salmon Nation 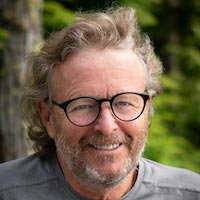