Murray Porter
Blues Man Murray Porter’s music career has taken him all over the world for the last 40 years. He’s a proud Mohawk man from Six Nations of the Grand River Territory in southern Ontario, who now lives on Squamish Nation unceded territory in North Vancouver, British Columbia.

Murray may have a blues soul to the core, but he also grew up on rock and roll, R & B and country music. Porter’s first CD since his 2012 JUNO Award for ‘Aboriginal Album of the Year’ is titled, “STAND UP!” and reflects these early musical influences. He strongly feels that this album is some of his best music to date. This album was nominated at the 2019 Native American Music Awards for ‘Best Blues Recording’ and ‘Best Male Artist of the Year’. One song, `Love Will Find A Way’, words by Elaine Bomberry and music by Murray Porter, charted at Number One, on the Indigenous Music Countdown, the week of July 18, 2020.

During this COVID-19 era, which has rocked all of our worlds, and cancelled the live music scene throughout the world, there have been ‘virtual concert series’, that Murray has performed at including: `#CanadaPerforms with the National Arts Centre’,`Tkaronto Music Fest’, ‘Assembly of First Nations Water Summit (twice)’, `Live at Mikey’s Place’, ‘Indigenous Music Awards Performance Series’, ‘Rez Bluez 25th Anniversary’, presented by the Toronto Blues Society & Elaine Bomberry. Plus, he’s performed for a number of Indigenous organizations virtually as well for Elders Gatherings and Friendship Centres.

Whether he is playing an intimate venue for local blues fans, as a solo, duo, trio or with a four-piece band, or on a festival stage to thousands of music aficionados, Porter’s love of performing comes across clear and strong. He has been compared to Dr. John, Joe Cocker and even Elton John! Robbie Robertson has called Porter “a master bluesman.” He captivates audiences wherever he performs and makes new fans…and they never leave his show disappointed. 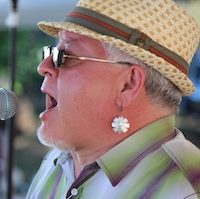